Hey guys!! As we make our way through the 21st century some pretty amazing things are making leaps and bounds forward, sparking new ideas and new conversations. Today I’m touching on the 3D printer, a printer that can build structures and homes.

The 3d printer was invented in the early 80’s and since then has made a huge impact on our future. This new way of being able to obtain objects has changed not only the limitations of designers, but also the medical field. Designers are able to quickly build prototypes, and now, even building finished products thanks to 3D printers. 3D printers are capable of building homes with concrete frames in as little as 24 hours, that could last up to 175 years. This will be amazing for places that are susceptible for natural disasters. Where once labour cost, material cost, and time were reasons to which something wasn’t built, could quite possibly be a thing of the past.

People are also looking toward the nature of human bones and trees to change the denisty in concrete walls. By creating a density gradient, walls could be semi-translucent but be just as strong. This will decrease the weight, the amount of build material used, AND (the design mind in me thinks this is the coolest part) the amount of interior light needed. How amazing would that be?!?!

Concrete isn’t the only material being used for 3D printing structures. A team of architects in Chicago have designed a home made from plastic and carbon fibres called “Curve Appeal”, which will begin printing sometime this year. The building will be created with multiple panels and then welded together to form a continuous structure.

Here’s a few concept pictures… I love it!! 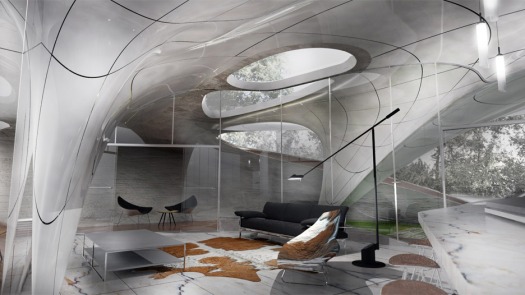 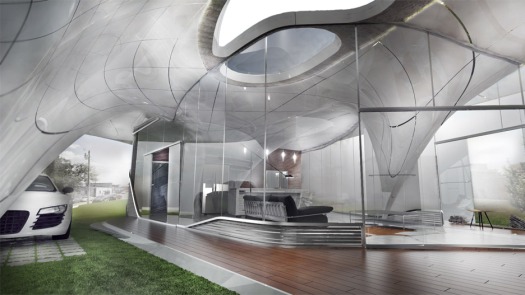 What do you think? Could you live in a place like this?

This new way of producing structures can be cost effective, quick, and sustainable. However, what does this mean for our traditional building methods? There are still many bumps that need to be smoothed out for this method to turn into the norm. Many people have been questioning the size of the printer in comparison to the size of the structure it was building. However, the “Curve Concept” designed by the architects in Chicago  have come up with a solution for that problem.

Maybe we are closer than we think, or maybe this is something that won’t be welcomed here because it could affect the 1.3 million construction workers here in Canada. Either way, it’s very exciting to think of the possibilities and the places we could build with this growing industry. We have always been able to adapt to new technologies and embrace and create jobs that come from that. Why would this be any different?

What do you guys thinks about 3D printed buildings?

Check out some more photos and let me know what you think!!

Previously On The Design Alcove